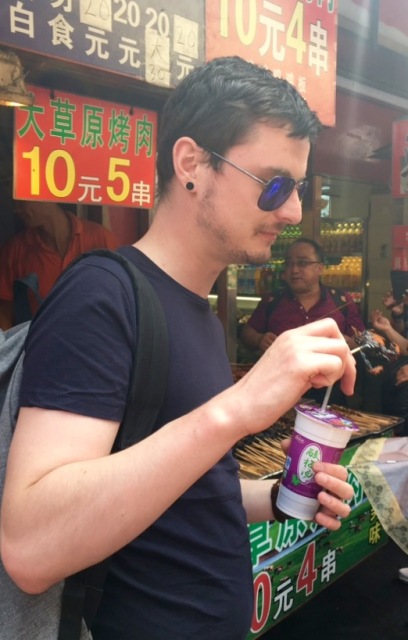 “They’re kind of crunchy” said Dave from Manchester as he gnaws on the scorpion tail in Beijing’s busy Night Market. He adds, “I’ve tried the spiders, I wanted to give these a try too.”

Hawkers wave skewers of the live creatures, legs still struggling to get away, shouting “delicious, you try”. Steam billows from pots of dubious dishes, weird smells permeating through the narrow passages as hundreds of Chinese people and western tourists squeeze through to see what the next stall offers.

Despite its name, the Night Market is open all day to serve a whole host of exotic delicacies including fruits, hand-made sweets, teas, ducks’ tongues, scorpions, spiders, chicken feet, snakes, starfish, and tiny whole birds (beak and all) drenched in a spicy sauce. Nom nom. 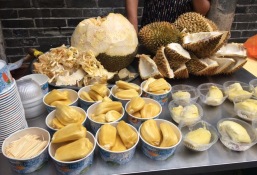 Tourism is still relatively new to China and vegetarianism is a pretty alien concept. Unless you know Mandarin, it is impossible to know what you are ordering. You can get veggie food but you can’t be a fussy veggie here. Very few restaurants have English menus and hardly anyone speaks English (why should they?). Luckily, they often have photos of the dishes, so you can guess whether it might be meaty. We went to a local restaurant in Xi’an and ordered three dishes that looked meat-free – one of which was a goer. Making mooing and chicken noises followed by vigorous head-shaking didn’t work. It just made counter staff exchange nervous glances. I would definitely recommend getting your guide to write down the Mandarin for vegetarian (which we rather belatedly asked for). It will save your dignity when ordering food.

I thought I might come across cages of dogs in the food markets. But I saw none of these and the Chinese people with dogs clearly doted on their little pets rather than looked upon them as dinner.

There are stalls on almost all streets offering familiar fruits next to bizarre looking varieties such as the spiky Chinese favourite, dragon fruit, and mulberries. They even grow apples to look like little laughing Buddhas.

But Buddha apples aside, the Chinese don’t dress their food up as anything other than what it is – and they like their meat. They don’t have our squeamishness for live cooked food. You see young and old alike gnawing on skewers of legs and heads. For Dave the crunchy scorpion was a novelty to try but this is a common regular snack for the local people – a bit like a bag of crisps for us.

3 thoughts on “Can you be a veggie in China?”