“You must not make eye contact with the orangutans as they will see this as an act of aggression. You may get one climb on you and I have even known people stripped naked by an orangutan before.” WHAT?? I am not sure I believed everything Darwis, our guide, said in his briefing on the way to the Sepilok Orangutan Rehabilitation Centre but I did a mental check on my current underwear situation ‘just in case’.

Funded by Sabah Government, the centre was set up in 1964 to return orphaned, injured or displaced orangutans back into the wild. Poaching and loss of habitat, mostly through palm oil plantations, have decimated the population of this now endangered animal. Stressed and traumatised, many are found in cages being sold on the black market. The centre rehabilitates these primates so that most eventually achieve total independence and become integrated into the Sepilok wild orangutan population.

You are not allowed to take anything into the enclosure, so we stow away our bags and water into the fusty lockers. There is a film introduction but we skip this, keen to get our first glimpse of these ‘Men of the Forest’.

We follow a boardwalk through the humid forest through to the modern looking building that is the juvenile outdoor nursery. The cool temperature in this air conditioned building is a welcome relief. The auditorium has one huge window across the whole side of the building looking out onto what is essentially an adventure play area for orangutans. The windows are angled so that the animals only see their reflection rather than us. Four young orangutans swing effortlessly past the window, doing cartwheels on the ropes, swinging from the monkey bars and generally looking like they are having a great time. Some hang around while others swing off and disappear into the dense forest. The purpose of this nursery is not just to entertain the young orangutans (and us) but to teach these orphaned creatures how to climb and to ultimately survive.

We reluctantly drag ourselves away to head to the main feeding platform. The centre has two feeling sessions a day (10am and 3pm). Once released into the wild, the animals can choose to return to the feeding platforms. Some do. Others live a totally wild existence in the surrounding Kabili-Sepilok Forest.

Before we get to the feeding platform we encounter two orangutans sauntering towards us on the boardwalk. They are not interested in getting us naked. They roll around for a while before disappearing around the corner. In the distance we see (and hear) a herd of pygmy elephants. 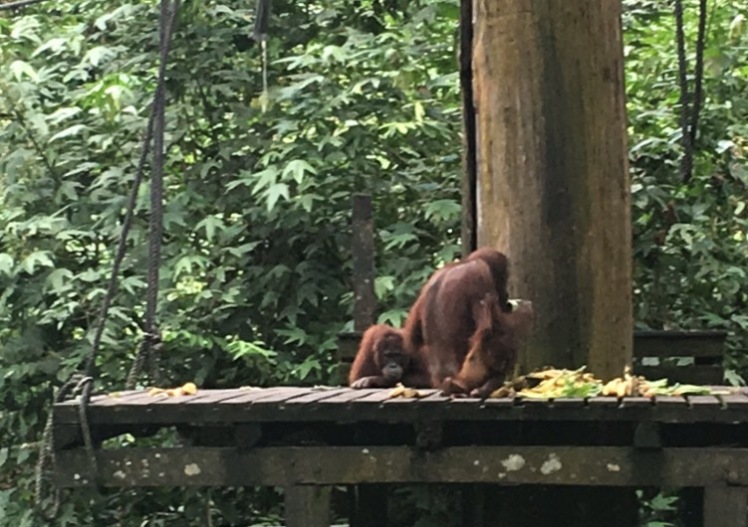 As we reach the crowded viewing area we see a mother with her baby eating an assortment of bananas, papaya and some unidentifiable ‘greens’. A young male waits his turn patiently but you can see his frustration. A couple of times he inches closer but the matriarch sees him off. She sits back down, casually continuing with her breakfast. He glares sulkily at her.

Over the next half hour a cheeky pig-tailed macaque grabs his breakfast from the platform, birds fly down for scraps and even a squirrel grabs two bananas, peels and eats these hanging from the tree trunk. The hungry male youngster waits. As people drift away bored we watch the drama unfold between the protective mother and the young male. His patience is rewarded as she eventually leaves the platform. He casts nervous glances in the direction in which she left as he tucks in to the remaining food.

With feeding time over, we head across the road to the Borneo Sun Bear Conservation Centre. This is directly opposite the Orangutan Centre and, similarly, is home to 44 Sun Bears (aka Honey Bears) all of which were rescued or orphaned.

We follow the boardwalk out into the forest. This has two main viewing platforms perched around 20 feet above the forest floor. Helpful rangers point out the lazy bears sleeping in trees. We watch two tussle up a tree. Ono plods towards us and plops down yawning on a log. Two youngsters share a coconut. With short black fur, a cream muzzle and a small stocky frame, each bear has a unique chest marking. One of the smallest bears in the world, you would be hard pushed not to fall in love with these adorable creatures.

The forest enclosure allows them to learn natural behaviours and, once they have adapted to the forest, they are released back into the wild.

Sun Bear poaching is a major problem in Borneo. Found only in SE Asia, their population has declined by 30% in 30 years and they are now classified as vulnerable. Chinese medicines use the bear’s gall bladder in their ‘remedies’. Often the mother is taken and killed for her gall bladder while her cub is sold on the black market as a cute pet. A book on platform 1 shares the stories of each bear’s background. For example Montom was kept in a wire cage and fed human food. When he was rescued, he didn’t know how to be a wild bear.

We thought that would be the extent of our orangutan-spotting but at the nearby Rainforest Discovery Centre we see a wild female orangutan with her cub eating fruit in a tree. A rare treat for us! And if that wasn’t enough, later that evening at Sepilok Jungle Resort, we are surprised by the arrival of an adult male orangutan in the restaurant. He comes every couple of months (maybe when he misses the afternoon platform feeding). He is given bread and milk, which he guzzles down to the delight of guests, before curling up for a nap in the corner.

The centres in Sepilok do a vitally important job in the conservation of these species. But more needs to be done politically to tackle poaching. We need to stop demand of these animal ‘products’ in the first place. We also need to look at the deforestation issue that is causing loss of habitat. Shockingly, palm oil is in around 50% of all products sold in our supermarkets!! From lipsticks to washing powder, margarines to pizzas, it is hard to avoid. I believe clear labelling should be added to all products to indicate which have this cheap vegetable fat.

Orangutans are so ‘human’ in their expressions and behaviour. It has been incredible being so close to these beautiful creatures. But in all the encounters we stay fully clothed and unmolested.