A cheer breaks out from the crowd perched shivering at the top of Mount Batur as the sun breaks through the cloud. We have hiked up the 1717m volcano to see the sunrise. It has remained stubbornly elusive until now and we bask in those few warming rays before it retreats back under its blanket. The tease!

Picked up from my lovely accommodation, Nugraha Guesthouse in Ubud at 2:15am and stopping for a random cup of nuclear strength coffee, we set off up the mountain at around 4am. Passing other hikers in leisure sandals, I feel over-equipped with my walking boots and poles.

Before long we join the log jam of people toiling up hill. Following their guides and armed with tiny torches, some don’t look as if they ever get out their cars. I look up the hill, still in darkness, and see hundreds of torch lights bobbing along the path ahead. So many people! I soon realise that my boots and poles are a blessing as the path is loose, steep lava. That’ll be fun on the way down. You are not permitted to go up without a guide but the path is very, very obvious.

We reach the first summit at the crater rim and, passing the huge crowd here, head up to the actual summit at the highest point of crater – to another crowd. 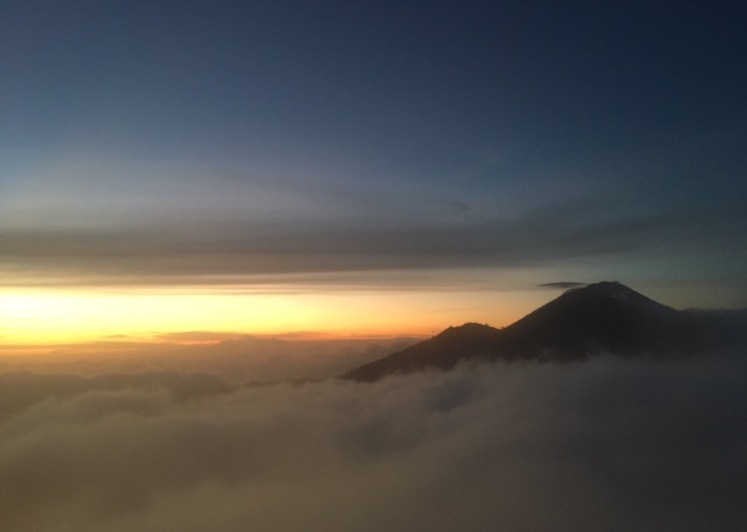 After around twenty minutes our patience is rewarded as the sun peeps through the clouds and the hills across the valley throw off their fluffy cover. It is really quite cold though. A few photos and its time to head down.

Back on the lower crater rim, cheeky monkeys are looking for tourist treats. We descend a little way into the crater to feel the hot vents. The ambient air is noticeably warmer here. The foliage is lush in the crater.

Our guide Nadi points out the lava flow from the last major eruption in 1926. A small eruption happened in 2000 – last week in volcano terms! The cloud has cleared now to reveal the aqua marine water of Lake Batur on the valley floor. That looks welcoming as the temperature starts to rise. 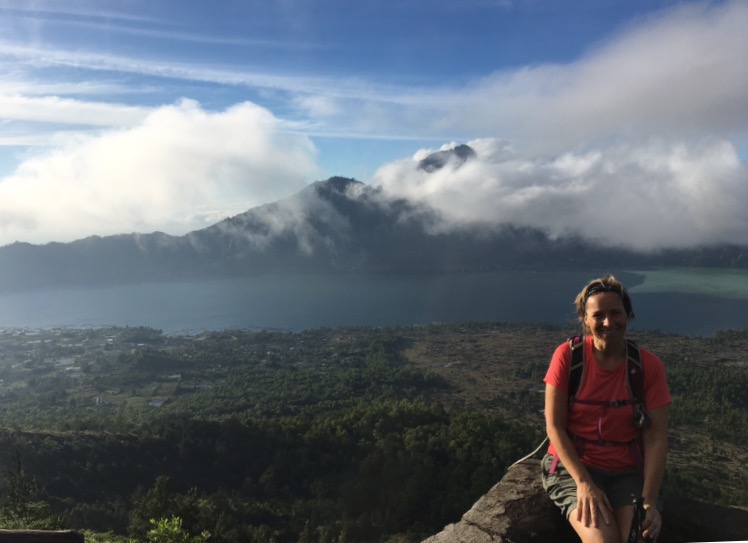 We pass the sandal-and-sock brigade slipping on their backsides on the way down. As we reach the bottom and look back we see the clear shape of the volcano. The crowds and clouds have now dissipated.

All tour agents sell the same sunrise walk package. Numbers are not restricted. They hire the guides (I also use the term guide fairly loosely) as they get bookings. So it makes it incredibly busy in high season. If there were an option to climb the mountain during the day I think this would be better – I don’t particularly need to see the sunrise (or get up at 2:15am!). But hurrah, having got up at that ridiculous time and slogged up behind the other tourists in their sandals and socks, the sun put his hat on. Hip hip hip hooray!

Where to go
There are agents across almost all towns in Bali selling the sunrise hike up Mt Batur. This costs 400,000IDR (£24).