The wind whips around us trying to push us off balance as we pick our way across the flat topped summit. Thick moss obscures the ankle-twisting boulders and rocks beneath its lush green carpet. Walking is hard. Talking, or rather hearing anything other than the howling wind, is impossible. It is battering. 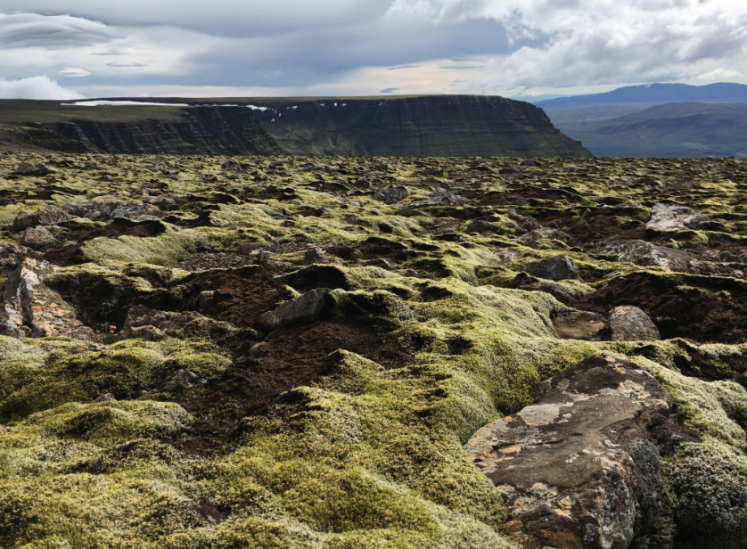 Tired of being surrounded by the throngs of tourists (of which we are, of course, too), we set off to scale Mout Esja. Although only 914 metres high, Mount Esja dominates Reykjavík’s skyline and provides a stunning backdrop to Iceland’s capital city. As we set off from the car park and closed restaurant at Esjustofa on the well-signed, easy to follow trail, it is breezy. It gets progressively breezier the higher we ascend. Stopping for a breather we look down across Faxaflói Bay, Reykavik shining in the distance. 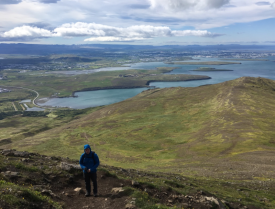 The track is divided into sections marked with signs along the way. The sign for Steinn is attached to a huge boulder but even this is not impervious to the relentless wind on the mountain as it lies toppled across the path – the trail marker still fixed steadfastly to the monolith.

After a short scramble near the top, we reach the summit of Þverfellshorn. We plan to cross the summit plateau and descend a large gully marked on the map as Gunnlaugsskarŏ. The plateau, aside from the odd cairn in the distance, is largely featureless. 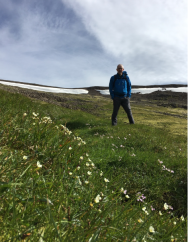 Wind-blasted tears stream down our faces as we scour the edges of the ridge for the descent gully. I climb down a loose gully tentatively to see if this leads to the descent trail. I cannot see over the edge but I sense a large drop so reverse up, equally tentatively. We continue along the edge of the range and see a broader gully. Wild flowers cling to its flanks, marginally sheltered from the wind of the summit. Despite it being August, snow still lies in the gully.

Delicately descending the loose stones in the gully, the trail leads to a flank on the mountain where the going gets a bit easier. As we descend the rump, I look back up and see the earlier gully that I so tentatively investigated. I can see from here it leads to a large vertical waterfall. 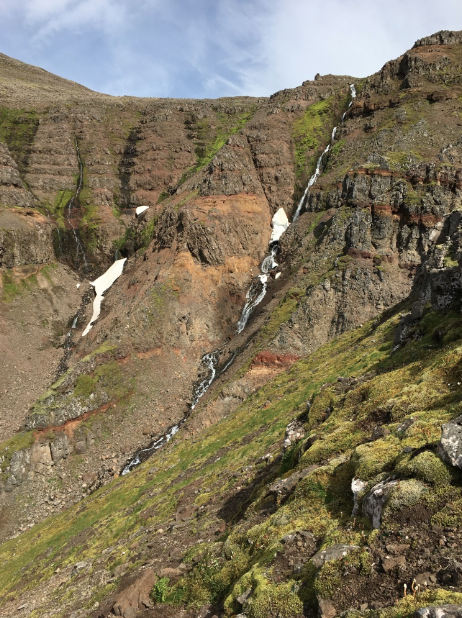 The descent gully was not straightforward to find if you are not familiar with the mountain and I would not recommend this route when it is windy or when the summit is in white out through rain or low cloud.

But the hike was certainly a blast of fresh air and definitely did blow away the cobwebs.

How to get here:

The trail starts at Esjustofa just off Route 1 north of Reykavik and Mosfellsbær. This is a 20 minute drive from the capital or you can catch the number 15 bus from Hlemmur Bus Station and change at Háholt in Mosfellsbær for the number 57 which brings you to the Esjustofa car park.

How long: It took us around 4.5 hours to complete the circular route back to the car park.

When to go: June to September (dependent on snowfall)

Cost: There is no charge for parking or using the trail.